All involved have come together and donated their time and efforts to share Tommy’s music and help support his family. So please share his music and spread the word.

The death of Tommy Dardar stunned the blues community and left a void that will never be filled. His 1999 release, „Fool for Love,“ served notice to the world what his family, friends, and fans had known for years: that Tommy was an extremely gifted songwriter, a powerful vocalist, and one of the finest harp players on the Gulf Coast.

With his untimely death, many feared that release would be his last. He had begun work on a follow-up project in 2001, but financial considerations and life have a funny way of showing up and putting the best laid plans on the back burner. His closest friends and musical cohorts were aware of these unfinished recordings and under-took the effort to see that they were not left on a shelf to gather dust.

Enter Grammy Award winner Tony Braunagel, life-long friend and musical collaborator, who took it upon himself to pick up the baton and finish the project in his memory. Nine tracks were initially recorded at Ultra Tone Studio (Studio City, California) in 2001 around core musicians Tony Braunagel (drums), Hutch Hutchinson (bass), Jon Cleary (piano), and Johnny Lee Schell (guitar). To complete the project, more of his musical family were brought in, including Mike Finnigan and Barry Seelen (Hammond organ); Joe Sublett (saxophone); Teresa James, Tommie Lee Bradley, Terry Wilson and Larry Fulcher (background vocals); and Jimmy Rose (percussion).This swamp masterpiece has been a labor of love and is now ready to be shared with the world. 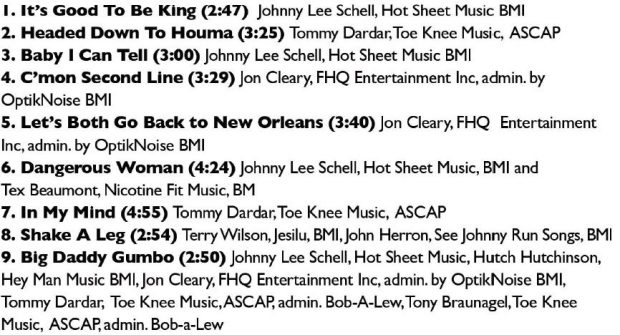