Marshall Lawrence’s fifth release, “Feeling Fine,”  is a return to high-energy rock and blues reminiscent of the late ’70s and ’80s British and American rock scenes. Marshall’s fiery approach to guitar playing and catchy songwriting come together for 10 original, exciting, hook-laden tracks. Marshall has the distinction of being a Maple Blues Award and Canadian Independent Music Award nominee. In reviews of his previous CDs, Marshall has been described as a „neo-Delta visionary“ (Living Blues) and has been compared to Woody Guthrie (Living Blues) and to Taj Mahal, Roy Bookbinder and Corey Harris (Rootstime).

„I did the rock thing, I did the punk thing, I did the funk thing, I did the blues — and for me this album is a progression to coming back home,“ Marshall says. „I use all of these musical influences in my approach to playing, whether I’m playing acoustic or electric. For me it’s not about playing like someone else because they’re popular, it’s about self-expression and playing what I feel. It’s about making sure I do whatever I can to help the listener have a good time and feel fine.“ 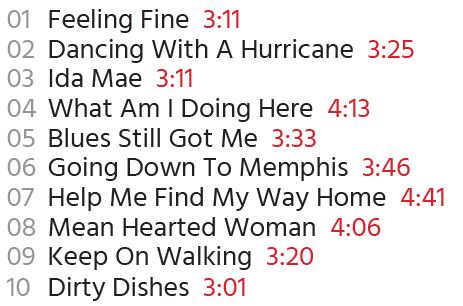